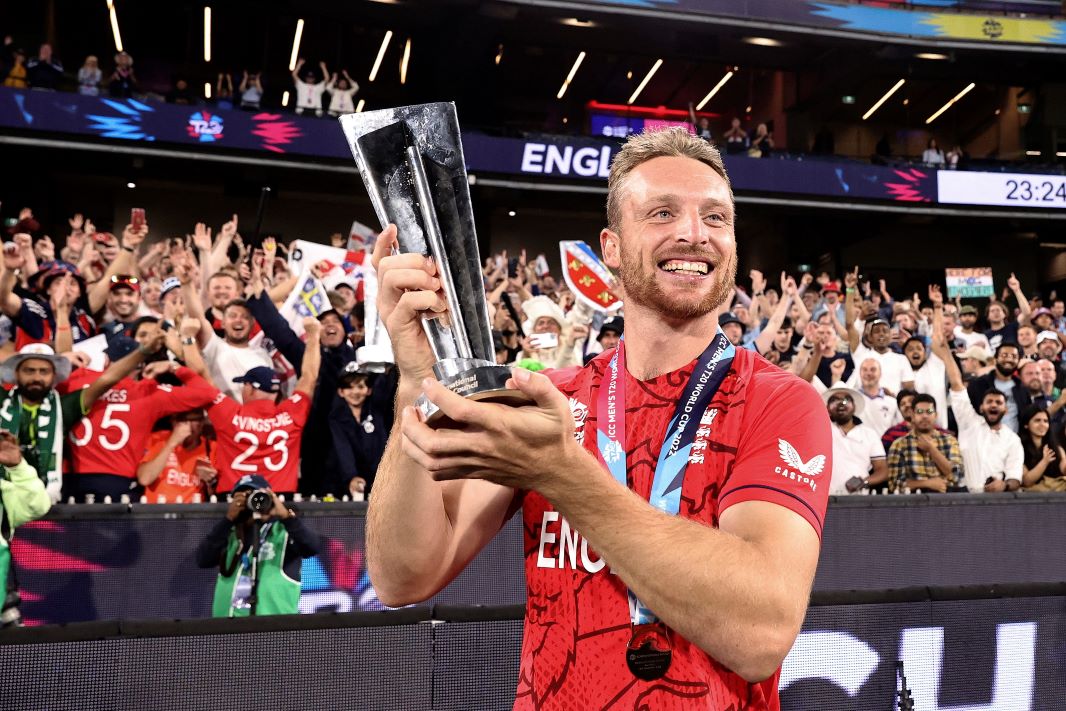 Posted at 13:48h in Uncategorized by Jim Hindson

Jos Buttler’s reward for leading his country to the T20 World Cup title is a move up to No.2 in the T20 Player Index, and he is closing in on top spot.

Rashid Khan is clinging on for the time being, but Buttler – who was the fourth-highest run-scorer in the competition and hammered an unbeaten 80 in the semi-final win over India – is now just 19 points off the Afghanistan leg-spinner.

Buttler wasn’t the only mover from within the world champions’ camp: Moeen Ali had a mostly quiet tournament but sits at No.4 in the rankings, one spot beneath Glenn Maxwell, whose freak leg-break last week has ruled him out of the Big Bash, which might harm his ranking in the coming months, particularly with their fellow allrounder, Liam Livingstone, on the charge.

The big-hitting Lancastrian is up to No.6, while Sam Curran – player of the tournament in Australia – is into the top 10 for the first time, having climbed 13 places to No.9. He claimed five wickets against Afghanistan in England’s opener and finished with figures of 3 for 12 in the final victory over Pakistan, overall claiming 13 scalps as a novice death bowler.

The only man to take more wickets than him was Wanindu Hasaranga, who rounds off the top five. Remarkably, Hasaranga has left the last two T20 World Cups as leading wicket-taker, even if on this occasion he had the advantage of the extra games provided by Sri Lanka’s entrance in the first round. Likewise, Sikandar Raza, who took Zimbabwe from the primary stage to – at one point – the cusp of the semi-finals, has shot from fiftieth to No.21. No one hit more sixes than the veteran allrounder.

Another star of the last month, Suryakumar Yadav, the 32-year-old who has enjoyed such a remarkable start to his international career in the last 12 months, moves up to No.14, having begun the tournament on the edge of the top 30. He was the third-highest run-scorer and averaged almost 60 at a strike rate of 189.68. Virat Kohli, who finished with the most runs and half centuries against both of the finalists, is back into the top 50, sitting at No.48, having been on the edge of the top 80 beforehand.

Netherlands opener Max O’Dowd has leapt more than 100 spots after scoring 242 runs in eight innings, sandwiching him between Kohli and Kumar in the overall reckoning. He now sits at No.255. His compatriot, Bas de Leede, has shuffled up 200 places to No.123 – recognition of his growing stock on the franchise circuit.

Among the other English beneficiaries, Alex Hales is up to a career-high No.18, while Ben Stokes’ return to T20 cricket and starring role in the final have flung him from outside the top 300 to No.76, with Adil Rashid 14 places higher and Mark Wood sitting just outside the top 100.

Wood was the fastest bowler on show in Australia, but Anrich Nortje wasn’t far behind: the South African moves into the top fifty, alongside left-armers Josh Little and Shaheen Shah Afridi.